It’s not gold but when you’ve been digging as hard as Catherine and her fellow team mates, it certainly feels like it when you scrape out a piece of pottery! In the first of a series of A Cabeciña team members’ site diaries, Catherine tells us about the ups and downs of being an archaeologist for a day.

The day started out like any other, with a quick breakfast followed by the drive up the hill to the dig site at A Cabeciña. After the walk up to the site I gave the trench I’ve been working in for the past few days a once-over to see if anything had changed overnight. Unfortunately the archeology fairies had once again failed to visit our site, and the rectangle of rocks, dirt, and tree stumps marked out by string—denoting my group’s work area for the month—was looking exactly as it had the afternoon before. Each day we cart away wheelbarrow-loads of dirt taken from the top layers of soil in the trench, so there must be a daily change in topography, but it is sometimes not noticeable from one day to the next. I took another photograph to use as a comparison tool with past and future photos, as thus far a side-by-side photo comparison has been the only way to see that changes have actually been occurring each day!

This morning, instead of heading to the top of the site, where I had been fighting with a dense conglomeration of stones and roots yesterday, Carlos (our head archeologist) asked me to work at the bottom of the section, where this trench meets the one where parts of the circular walls making up the main structures of the hill fort were excavated at the start of the year. This is a more interesting area to be working in, due to the potentiality of finding the continuation of a wall or an artifact (Jenny found an excellent piece of a handle of a Roman pot yesterday afternoon, and today we all were on the hunt for similar finds). And, even better, this is a spot without as many stones and roots, and the prospect of a smoother section to scrape was definitely a bonus. 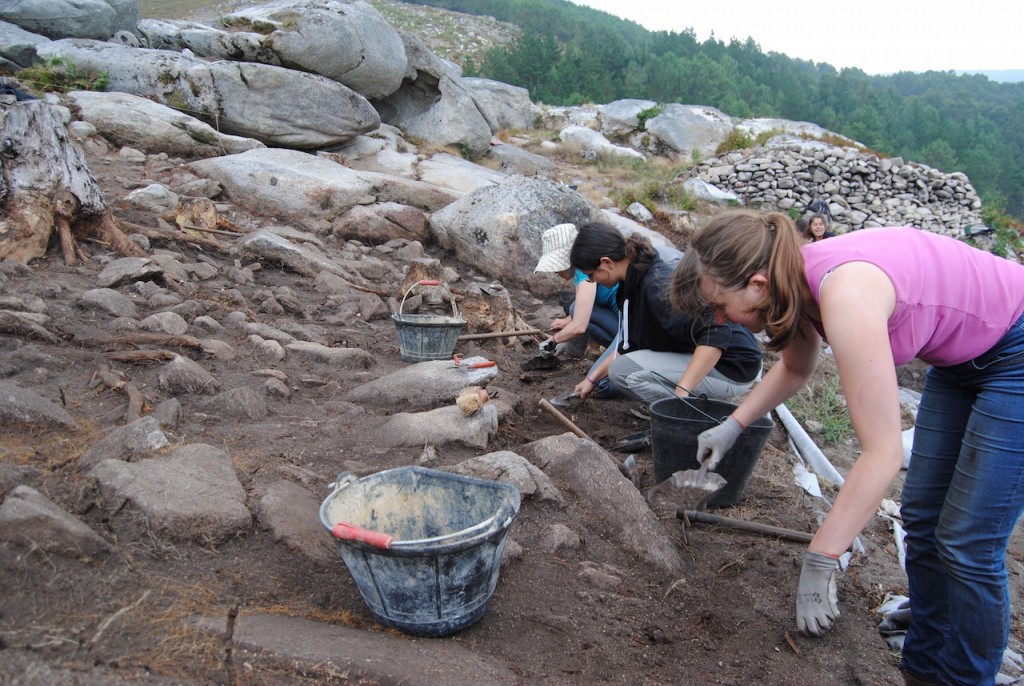 The morning passed uneventfully, and we were thankful for the cloud cover and mist persisting into the late morning, as it made working conditions cooler than usual and dampened the soil a wee bit, helping with the dust that the dry soil kicks up when disturbed.

After a short break around 11:30, we were summoned back to the site to recommence work, but with a change in plans—the guys and a couple of the girls would be in charge of removing extraneous and determined-to-be-non-structural rocks from the top of the site, and Jenny and I would move down to the lower trench to work with Israel, another of our professional archeologists, on his work area. Good news, as this trench has been the envy of those of us on the upper trench since the beginning of the dig due to its smaller area, flatter terrain, fewer stones, and more recently because of its finds. Whereas in the upper site we were claiming one small bit of Roman pottery that Jenny had discovered yesterday morning, Israel and his team were hitting piece after piece of similar pottery in just one part of their site, and the hypothesis was that there was a pot broken in-situ just beneath the surface. 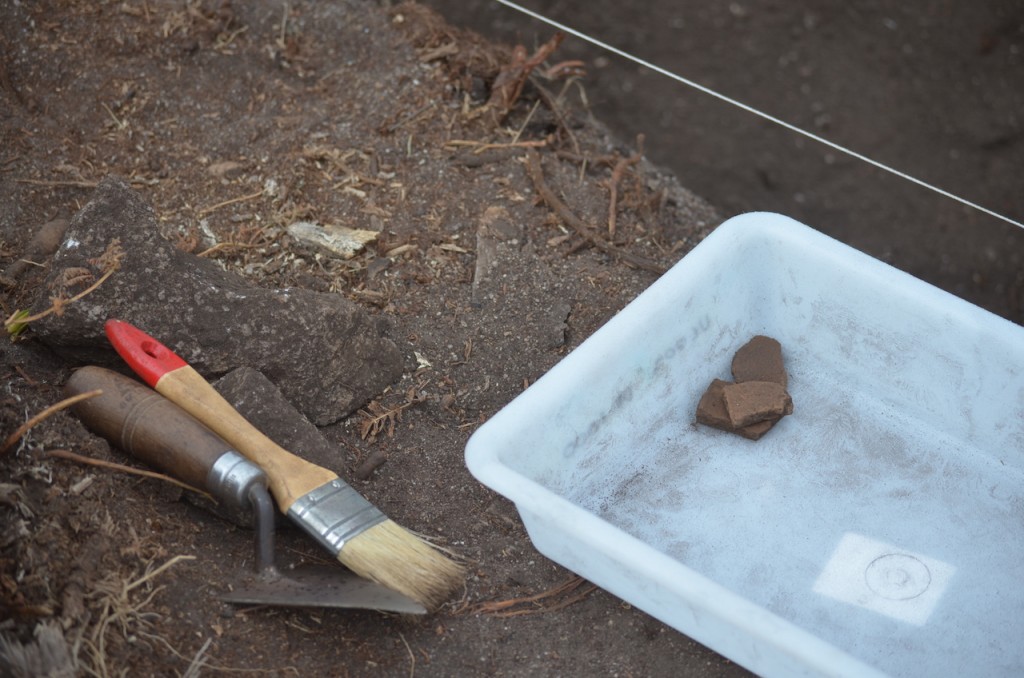 With that in mind, Jenny and I started scraping away with our trowels in the middle bit of the lower site and dumping the dirt into buckets destined for the spoil heap. After a few minutes Jenny had found a piece of Roman pottery, and added it to the plastic tray where Israel had already placed a couple of other small bits of pottery found earlier in the day. Glad for the group’s findings thus far but wondering if I would ever find anything similar myself, as I have been low in the find department thus far, I put my head down and continued troweling and shoveling.

Lo and behold, after a couple more minutes I saw a bit of reddish clay pop out of the soil and picked it up to examine it more closely. It was a piece of a Roman pot, with two sides meeting at a distinct edge. I smiled and showed it to Israel and Jenny, who grinned appreciatively.

Soon after the mist turned into rain, and we quickly clamoured over the sites to retrieve our tools, buckets, and bags before everything got drenched, and ran to the cars. The end of the dig day was a wash, but not my day in the trenches. Can’t wait to go back tomorrow and see what other bits of pottery we can unearth, and get a bit closer to the millennia-old walls that are hidden beneath the soil, rock, and roots of A Cabeciña. 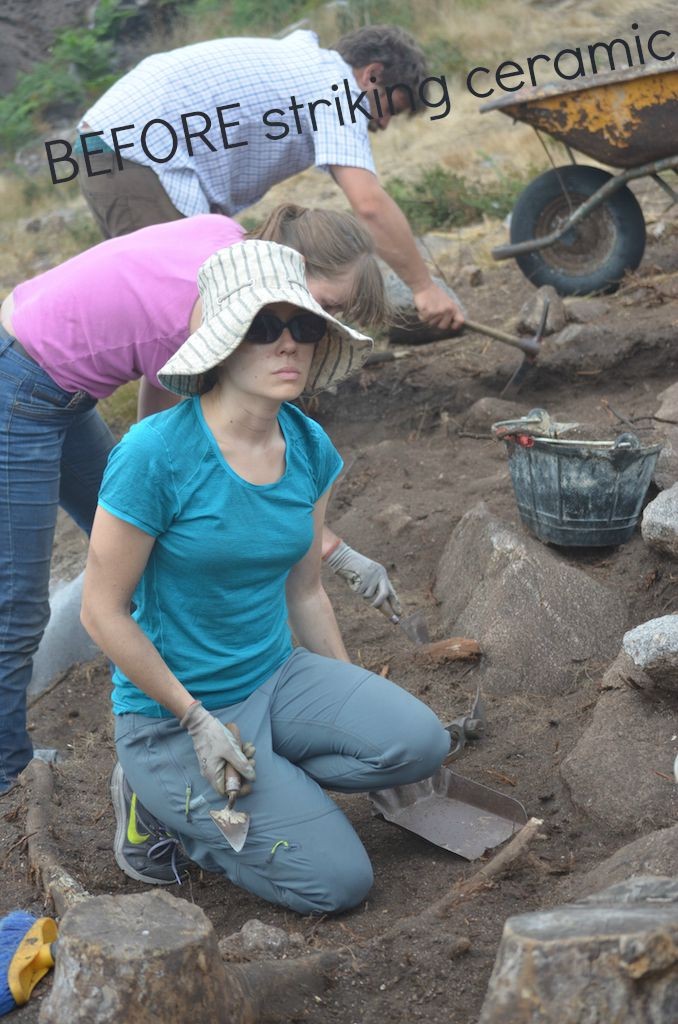 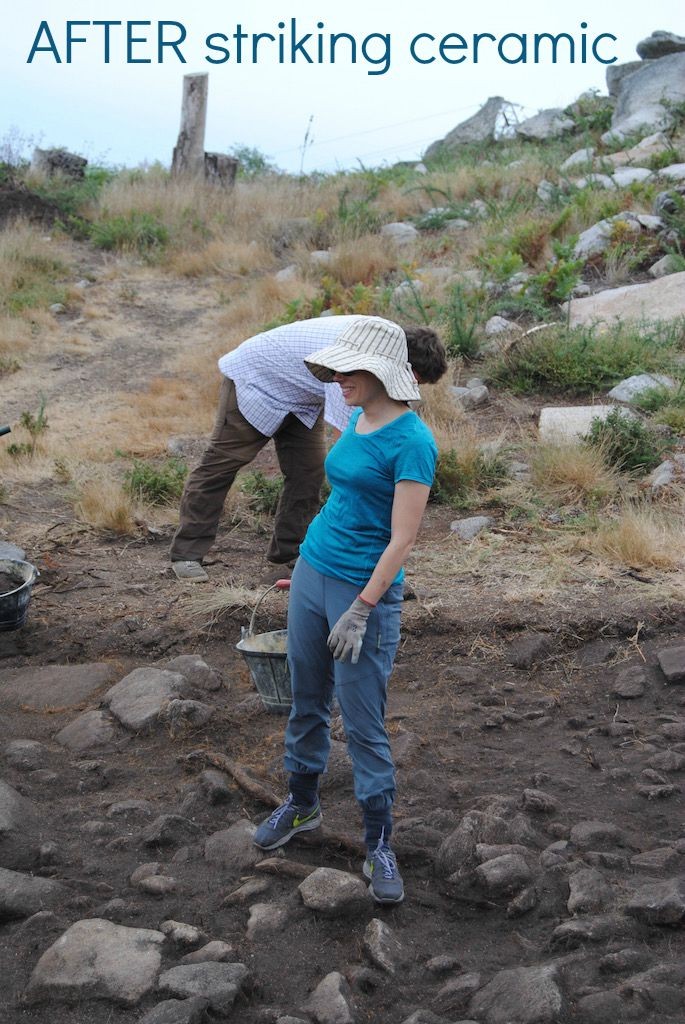